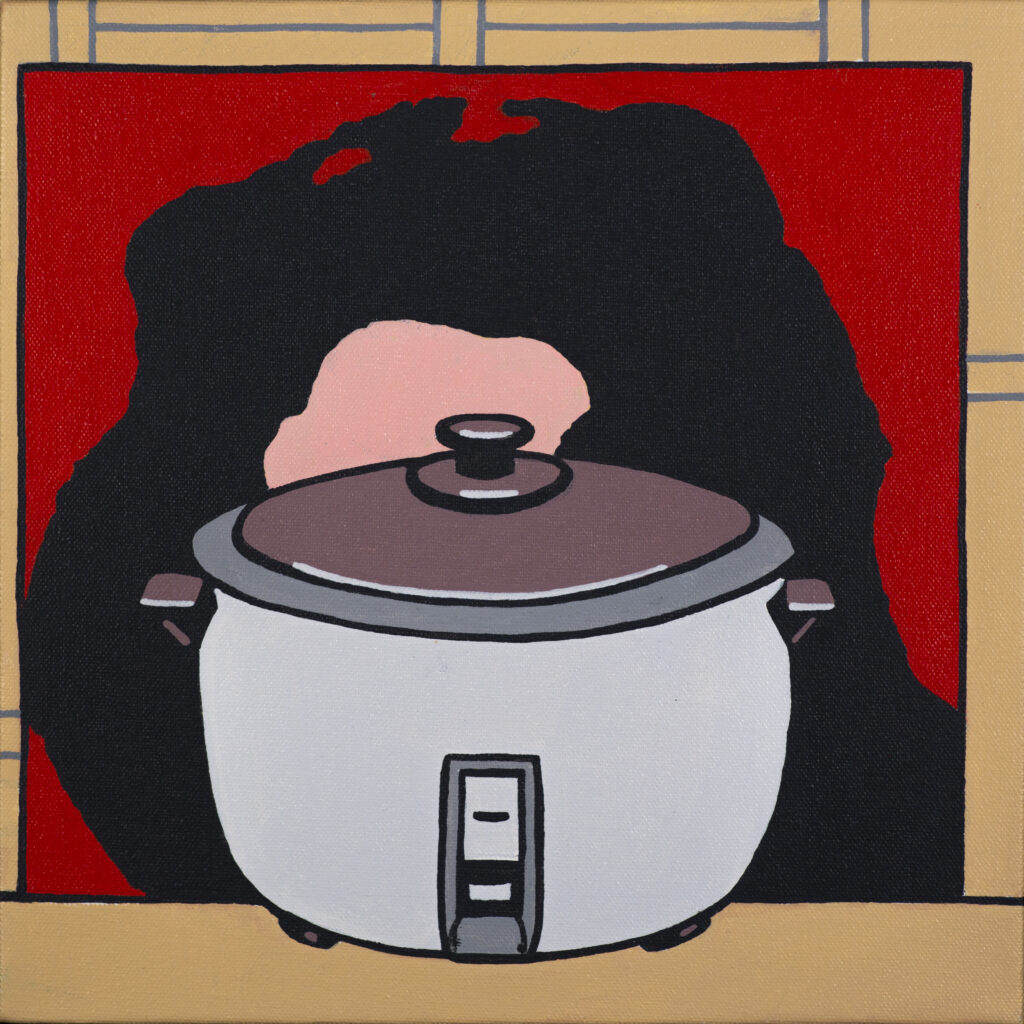 “This suite of 100 small paintings…., offers images and juxtapositions that may first appear random in relation to each other…. [It] is an attempt to make fresh sense out of nonsense, or to discover inherent truths in lies.”

The series of paintings, 100 More White Lies, was started in the middle of the covid pandemic in Roger Shimomura’s studio in Lawrence, Kansas.  The word “More” in the title refers to the suite’s immediate predecessor, Little White Lies, which too was comprised of 100 paintings.  Taken together the paintings, which began in late 2019 and complete in this series in late 2022, span the pandemic and political confusion of our recent history.   They reflect a visual record of ideas and images but not a logical narrative.  Instead, the combination of images in each painting echo’s themes that run throughout Shimomura’s over 50-year career paired with elements of chance, choice and randomness, which is in itself a theme in the artist’s work.

References to his own life experiences are central in Roger Shimomura’s paintings.  Barbwire and wooden buildings reference the Minidoka “interment” concentration camp where he and his family were sent during World War II.  This experience continues to resonate today.  Shimomura often confronts racism head on and does not shy away from using depictions of ugly racial caricatures of the Japanese “enemy” from publications of the time.

Roger Shimomura is a third generation Japanese American and he grew up immersed in American culture.  His love of comic books and later Pop Art imagery, with its’ inspiration in popular and commercial culture, developed into a painting style uniquely his own.  Shimomura’s paintings tell a story, through a distillation of information, pared down to an essence of visual economy.  The design, crisp, flat and lively color carry the story.

Shimomura’s visual language takes on the history, art and stereotypes of American identity.  He compares and contrasts East and West, Superman and Donald Duck, Warhol’s American icons, Marilyn Monroe and Elizabeth Taylor, rice cookers and samurai figures painted in the style of 19th Century Ukiyo-prints, to name but a few.  This is a sophisticated shifting play of subverted or reinvented cultural icons.

The paintings in 100 More White Lies, like all of Shimomura’s work, pulls the viewer in with recognizable images combined in unexpected ways with humor and beauty.  A longer look often poses more questions than answers.  The artist pokes and prods the thinking viewer to look and think and look again.