My practice of abstract painting and collage-making has continued alongside my more familiar architectural themed work and these two areas of interest are often cross referencing each other. I consider myself to be essentially an abstract artist, interested in how the 2-dimensional painting surface can create the illusion of light and space and how color and form can impact the viewer’s emotional response and create a joyous and uplifting experience.

Painting is in some regards a philosophical activity that addresses what it means to be alive and to represent the world around us. Painting is a language that artists use to communicate, and like other languages it has a syntax and vocabulary and stylistic biases. But abstract painting also relates to the human practice of craft and design, how we humans, for millennia, have fabricated objects both utilitarian and decorative, to enrich our lives and to express our creativity.

As with many abstract painters, I’ve been influenced by looking beyond the history of painting, at other areas of craft. For me, the woven Kilims of Iran and Turkey, for example, are a major inspiration, with their repetitive geometric patterns, grids and stripes, and very subtle, often muted color. When I moved from London to the American Southwest, I also became fascinated by the tapestry and craft of Native American peoples, especially Navajo blankets, and tapestry.

These influences seep into my work and create a dialogue between fine art and traditional craft, suggesting that the two are intimately connected and symbiotic.
In the past few years, I have been making small delicate, jewel-like paintings that start with an idea or reference point but build with an open and intuitive sense of design and color, which has not been pre-determined. I am constantly drawing on the history of abstract painting and its many adherents from the early Twentieth Century, such as Paul Klee, Vassily Kandisky and Sonia Delaunay and art movements such as Bauhaus, Dada and Cubism, through to post-war American dominated Abstract Expressionism. I enjoy the dialogue that all art has with that which has come before.

London born, Tucson, Arizona based artist, Andy Burgess is most known for his paintings of modernist and mid-century architecture. Pared down to abstract color elements, cool blues and electric oranges, Burgess paints an abstraction of the ideal of this architecture, the perfect life, a paradise of modern living. The same highly refined sensibility of color and form are present in everything that Burgess creates. His intimate abstract compositions and collages are equally compelling.

In 2012, Burgess had his first museum exhibition at the University of Arizona Museum of Art. In 2016, he was invited to collaborate with master printmakers at Tandem Press in Madison, Wisconsin to develop a body of work in various printmaking media. Burgess had a pivotal year in 2018 with a solo exhibit, Mid-century Perspectives, at the Tucson Museum of Art and the publication of his first monograph Modernist House Paintings: Andy Burgess by Nazraeli Press. 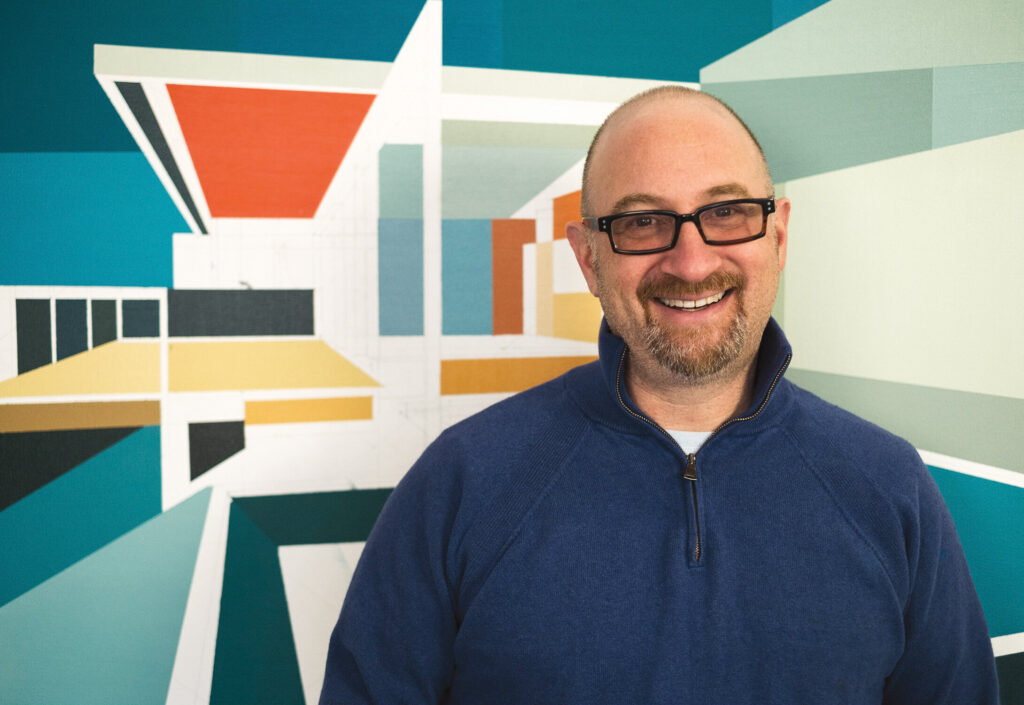