My works deal with personal observations about the experiences of living in a small town in southeast Missouri. The often strange and humorous occurrences, places, and people in these towns offer a never-ending source of inspiration for my prints. I call this work “rural satire”. My work has been influenced by an array of artists, among them the woodcuts of Albrecht Durer, the etchings of Warrington Colescott, nearly all the German Expressionists, and the late great Frank Zappa. My chosen media is printmaking, specifically the woodcut. The combination of dark humor with the inherently expressive medium of the woodcut heightens the complexity of my images.
-Tom Huck

Tom Huck possesses the uncanny ability to create technically stellar, jam-packed, in-your-face, black and white compositions that visually tell stories of complicated contemporary satire using the antique and painstaking slow technique of woodcut printing. Each large-scale print requires extraordinary focus and skill to carve, taking more than a year to complete. Equally impressive is the artist’s innate ability to embrace and sustain with relish the comic absurdity of human existence and connection with everyman. Huck comes across as not only the real deal but a worthy inheritor of the legacy. Art critic Ivy Cooper said, “Tom Huck is one for the ages, up there with his influences – Durer, Hogarth and Crumb.”

Tom Huck attended Southern Illinois University in Carbondale where he earned his Bachelor of Fine Arts in Drawing. He received his Master of Fine Arts in Printmaking from Washington University in St. Louis in 1995. He has exhibited on a national and international level, and he has lectured widely across the U.S. about his work. His woodcut prints are included in numerous public and private collections including: the Whitney Museum of American Art, New York; St. Louis Art Museum, MO; Nelson Atkins Museum of Art, Kansas City, MO; Milwaukee Art Museum, WI; Daum Museum of Art, Sedalia, MO; Fogg Art Museum, Harvard University, Cambridge, MA; The Art Institute of Chicago, IL; and numerous others. In 2011 Tom Huck was a recipient of a prestigious Pollock-Krasner Foundation Grant. 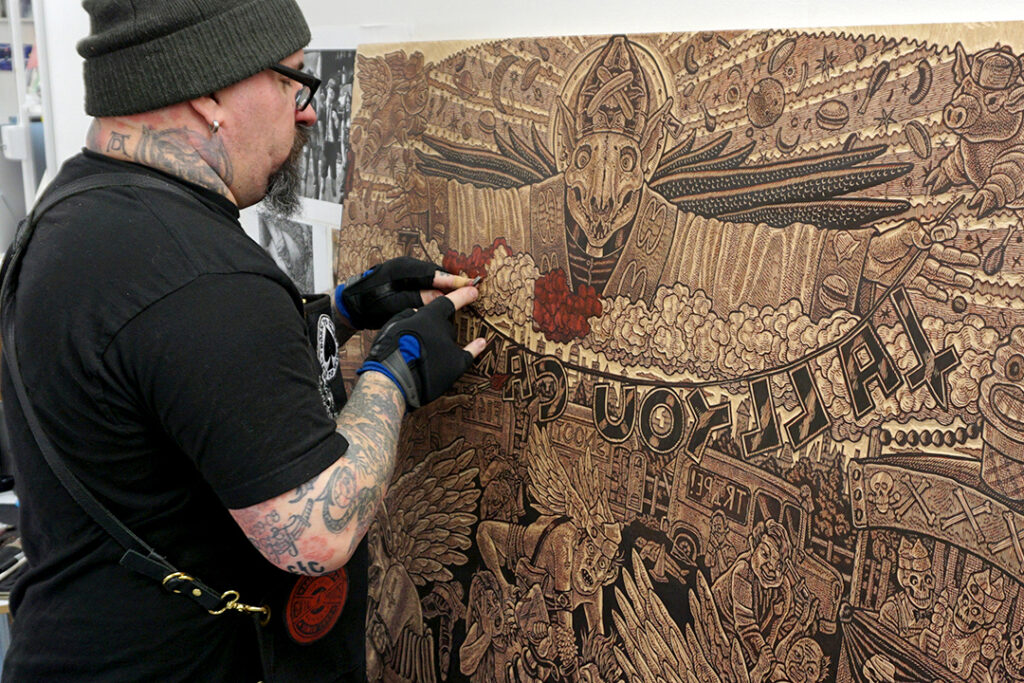