Hung Liu is primarily known as a painter of Chinese subjects, typically from the 19th and 20th centuries, whose paintings are based on historical Chinese photographs. Given the historical, often tragic subject matter she represents, her style is a kind of weeping realism. Liu’s newest paintings, however, are based upon the Dustbowl and Depression era photographs of American documentary photographer Dorothea Lange, whom Liu has long admired.

Shifting focus from Chinese to American subjects may seem a surprise to Liu’s audience, at first. But by training her attention on the displaced individuals and wandering families of the American Dustbowl, Liu finds a landscape of overarching struggle and underlying humanity that for her is familiar terrain, having been raised in China during an era (Mao’s) of epic revolution, tumult, and displacement. The 1930s Oakies and Bindle-stiff’s wandering like ghosts through Liu’s paintings are American peasants on their way to California, the promised land.

In her paintings of American subjects, Liu – who is known for a fluid style in which drips and washes of linseed oil dissolve the photo-based images the way time erodes memory – has developed a kind of topographic realism in which the paint coagulates around a webbing of colored lines, together enmeshed in a rich surface that belies the poverty of her subjects. In this, the new paintings are more factually woven to Lange’s photographs while also releasing the energy of color like a radiant of hope from beneath the grey-tones of history.

This approach first emerged from an accident in which Liu, who was sketching figures from an image projected on a blank canvas, ran out of charcoal and, to finish the drawing, resorted to colored chalk. Reminded of her Chinese academic training in which orange lines are often used beneath neo-classical and realist propaganda painting, she began experimenting with colored lines, soon in oil paint. The paradoxical result has been a softening of the ground and a hardening – a kind of mapping – of the figures, whose edges and outlines and details are sharpened by the colorful lines and squiggles that both stiffen and liberate them. In short, looking hard at Lange’s photographs has changed Liu’s painting, allowing her empathic sense of touch, and her deeply intuitive knowledge of color as a liberating force, to contact the stories underlying their surfaces – stories which, whether Chinese or American, continue emerging like hope for all who still seek a place in history. 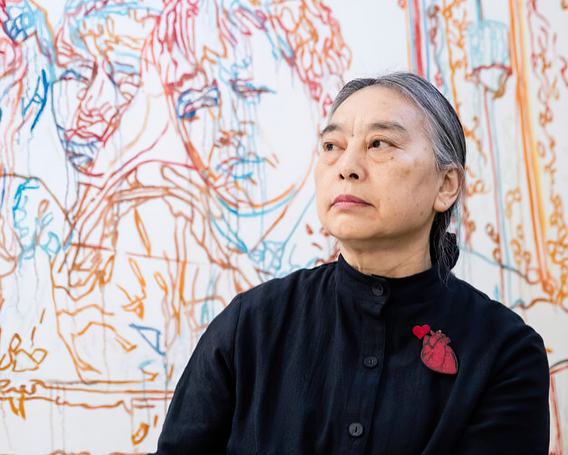