Knotted, crocheted and beaded 3D amuletic sculptural work is a recent acquisition in my skill set and came from direct observation of contemporary basketry and lifelong appreciation of functional and non- functional basketry of non-Western makers. The circular nature of the construction mirrors spiritual concerns leaning toward the transcendental.

While my formal training is in 2D design, printmaking, and painting, this work is from self-taught traditional textile techniques begun in childhood and pursued throughout my domestic life and art practice.

The work reflects trans-tribal influences from contemporary and traditional global sources and is informed by ancient practices of construction and embellishments. I have studied non-Western art forms, basketry of American and Canadian native tribes, and the earth-focused spiritual aesthetic of Australian aboriginal artists. Vernacular African architecture also influences the work, as do repetitive practices of rhythmic drumming and dance.

The knotted waxed linen circular sculptures of Sun Smith-Foret seem to speak with one voice, one to another, of a shared experience. Their forms accumulate slowly one small knot at a time, one semi-precious stone at a time, spiraling outward from the center into concentric rings. On the reverse of many of these works are intimate treasures, revealed only when the work is held in one’s hands, collections of shell from the Red Sea caught in a stitched net of thread. The making of these works is thoughtful, meditative, repetitive and focused.

The form of the sculpture itself, the spiral, is a universal symbol that in many ancient cultures depicts the path of the soul to enlightenment. The spiral also indicates the feminine and is linked to the generative force of the universe. The concentric rings, that expand from the center, are also attributes of growth and rebirth and represent a link between the human and the divine. The semi-precious stones also have attributed meanings and powers, such as energy or healing.

Smith-Foret is acutely aware of the power of the forms she creates and their tactile pull on the viewer. Her lifetime of technical expertise and pursuit of knowledge of other cultures and religions comes through in these individual works through their form, color, and texture that hum in rhythm with the universe. 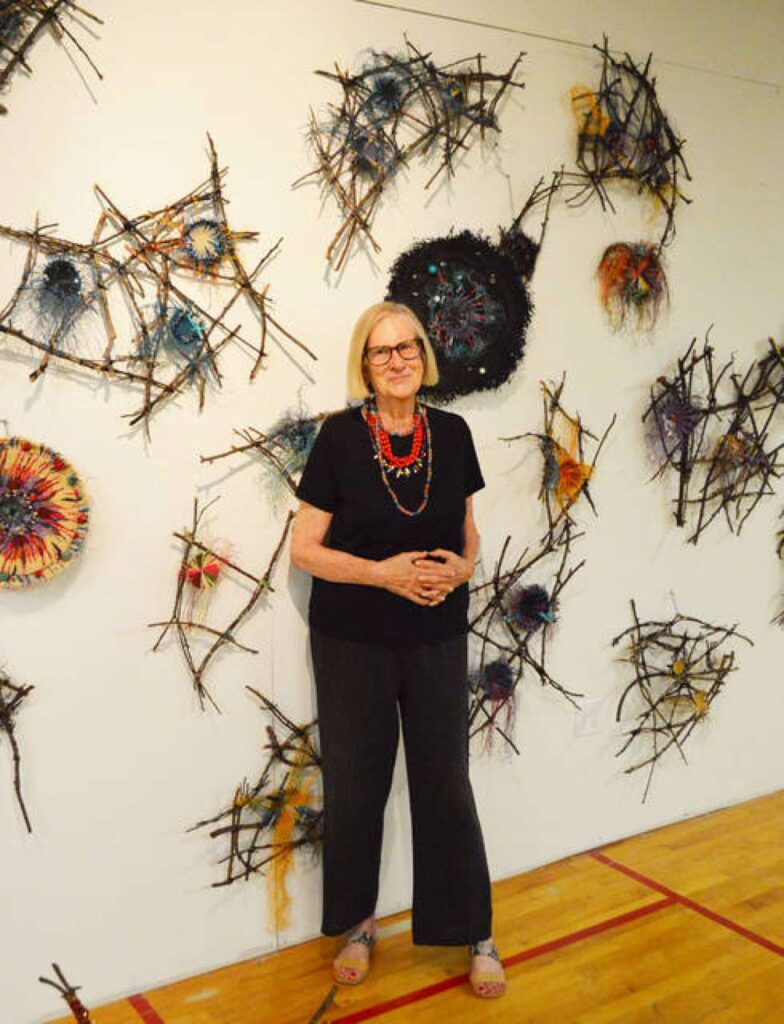