Melodramas: In Memory of Hung Liu 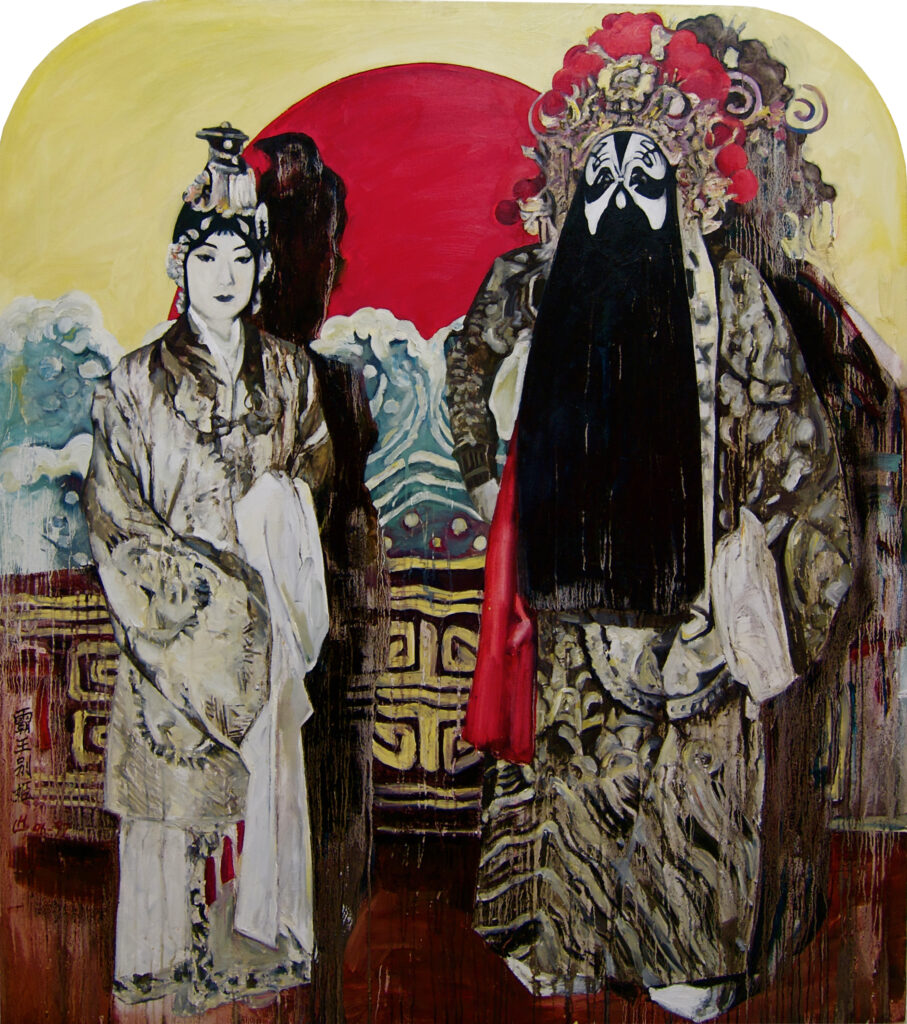 Melodramas: In Memory of Hung Liu

“I have always imagined that I were an actress…”

Hung Liu was born in Changchun, China in 1948, growing up during the Maoist regime. During the Cultural Revolution, she spent four years laboring in the countryside. In 1984 she immigrated to the US as a graduate student at the University of California, San Diego. Since then, she has had a fabled career, both here and abroad. On August 7, 2021, Liu died in Oakland, California, of Pancreatic cancer. She was 73.

Her story seems longer than her life.

In the wake of Liu’s passing, Sherry Leedy and Byron Cohen Galleries have worked with Hung Liu Studio to stage “Melodramas: In Memory of Hung Liu,” an exhibition in which Liu’s sense of theatricality – which is expansive, ironic, and often funny – is on full display through a selection of oil and mixed media paintings. Known for a kind of “Weeping Realism” expressing the pathos of human struggle, with washes and drips eroding the photographic freeze-frames of memory and history, Liu also painted on the grand scale of Chinese opera and the round-the-campfire intimacy of American dust-bowl folk music. Her work was often anthemic (which is why she liked Bruce Springsteen), and patriotic without the mindless verve of propaganda. She loved her homelands, China and America, and was not afraid to depict and critique the melodramas of each.

But she also painted them to the hilt – a twenty-foot (nearly stage length) revolutionary opera with unbridled operatic passion and balletic precision, western classical dancers in Maoist uniforms, pedal-to-the-metal opera choreographed along a strict party line, the whole spectacle melting away like ice cream on a warm Beijing night. A student of Peking Opera, the flamboyant, hyper-stylized stage performances driven by hi-pitched music and stinging percussion – in which only men could play women characters – Liu also understood the hyperbole at the core of Chinese revolutionary propaganda, merging Peking Opera and operatic propaganda into the stunning “Happiness for All Mankind,” whose title is taken from a lyric in the “International,” the worldwide Communist anthem. Clearly, traditional local opera and international state propaganda can only co-exist in the space of irony.

Irony also pertains to the paintings Liu did of the Dowager Empress of China, whose dynasty was the last one (so far), terminating in 1911 with the revolution of the new Chinese Republic. These Byzantine compositions depicting the empress enthroned and being carried on a royal sedan by her retinue of court eunuchs, express the theatrics of imperial opulence. Although still as a mask, her face is smoothly painted (almost like make-up) with an implacable gaze; the Dowager Empress radiates the otherworldliness of the mandate of heaven. Meanwhile, Liu’s painterly hand, ripe with materiality and almost masculine at times, draws her imperial subject away from the official, stage-like formality of its photo setting back to the soil from which her personal experience as a peasant during the Cultural Revolution was gathered like wheat. The fertility of her paint supplants the sterility of her subject.

Included in this exhibition are several of Liu’s more recent “Ensemble Paintings,” in which she paints images taken from Dorothea Lange’s photographs of migrant, Dustbowl-era Americans on shaped plywood panels, as if the figures have been cut from their frames and intensified with color. By adding painted canvas orbs to each composition, like suns hanging in the sky, Liu suggests a more liberated and theatrical environment for her subjects, as if performing in the gallery, nearly popping off the wall.

And of course, there is the Mexican immigrant folk singer in California, and the glorious “Kern County” in which immigrant schoolchildren, under the watchful eye of a teacher, learn to throw balls – one painted by Liu with a map of Oklahoma, from whence the children came, and the other of California, to where they’ve come.

Taken together, this selection of works expresses the earnest, sometimes comic melodramas that Hung Liu experienced in China – the background theater of revolutionary society – and the everyday romance of the American panorama with its commonplace ironies. Look back to look ahead. History in retrospect is theater.